What is LED Binning?

In the industrial production of LEDs, there are always deviations due to the production process: All LEDs in a product batch are different regarding to their characteristics. To avoid big deviations, those with similar performance are grouped together in so-called bins. Especially by LEDs with a white light spectrum, this process is necessary.

But why are LED binning ranges important for consumers? The answer is simple, binning systems manage different variations in LED performance during mass production and ensures specific lighting standards of the LEDs. Most manufacturers sort their production in:

Light output and color temperature are the most important bin criteria that effect directly product performance. For example, to sort the LEDs by light output, they are individually measured and sorted into prescribed bin ranges. Manufacturers tend to develop their own binning system that fits the production results. The bigger a bin range is - the more fluctuations are to be expected and vice versa. 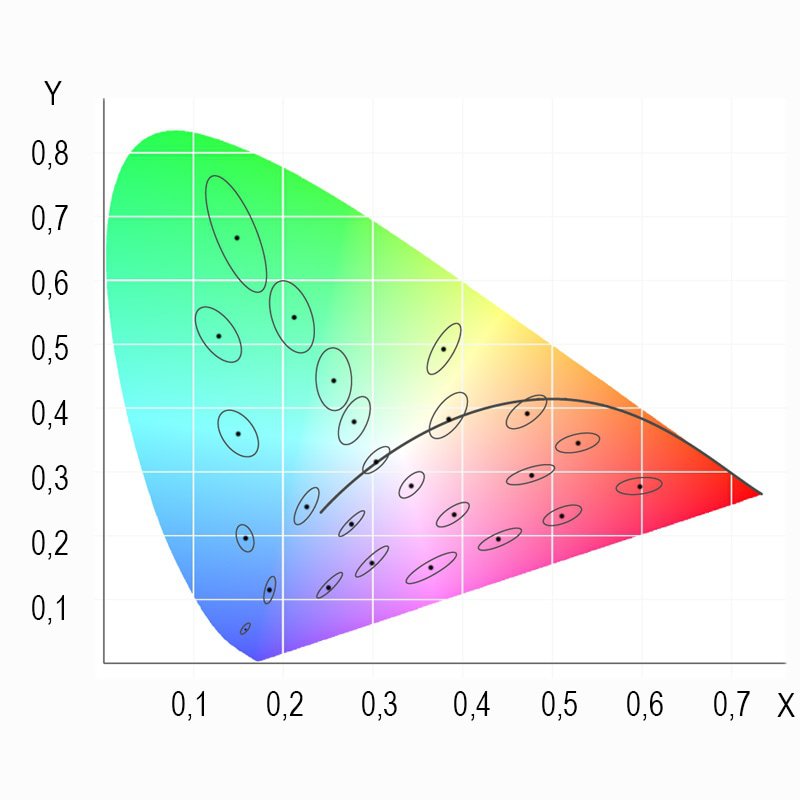 To ensure that LEDs have the same light temperature, they are sorted according to the ANSI (American National Standards Institute) standard. It defines chromatic aberrations using the MacAdam ellipses, also known as Standard Deviation of Color Matching. The ANSI standard recommends that the color value has to be located in an ellipse within four threshold units.

The ellipses informs the user about how far, for example, the light color of individual LED chips differ from each other. LEDs of these bin ranges guarantee uniform light colors, for example that 4000 K is cool white. Most manufactures are using 2 SDCM in average.

To make this system more clearly - see the table below:


In the past, the reference locations of the MacAdam ellipses were arbitrarily determined and far away from covering all color ranges. For temperatures more than 6000 K, no MacAdam Ellipse was assignable, unless the manufacturers specified their own.


The manufacturing tolerances of white LEDs and the definition of the "most similar color temperature" ensure that the same products can not produce a different color impression. Keep in mind, that there is also an age-related color drift after using it for example for 10.000 hours. Also the use of fixtures and covers can misrepresent the original color temperature. The only way is that LEDs are soon be made much more precise in terms of technology and quality.